Strawberries, who doesn’t love them? Ok not everyone does but you have to admire how their shape resembles a heart, especially when cut in half ♥. I adore dried strawberries and raspberries. I really love the freeze dried versions that can be crushed up and sprinkled over cakes and breakfasts and so forth. This weekend, I picked a tub of strawberries out of my fridge and realised that half of them had fluffy grey mould on them. Not ideal to say the least. So I gave the non mouldy ones a good wash down in water and vinegar and cut the tops off and they weren’t too bad, begining to go a tiny fraction squishy so I decided to do make some oven baked strawberries (and raspberries).

This takes an awful lot of time at a very low heat but the fact that my house smelt like sweet berries all day was enough to say they were worth it. I ended the cooking time after 5 hours. If I had left them longer then they would probably have been even better and crisper but after 5 hours they were crisp on the outside and slightly chewy on the inside. Perfect for topping my Greek yogurt and granola breakfasts with! Given the time needed for these, I don’t make them too often, if I am honest, once a year. Usually around valentines day. They make fabulous valentines gifts, prettily packaged in glass jars with ribbon. 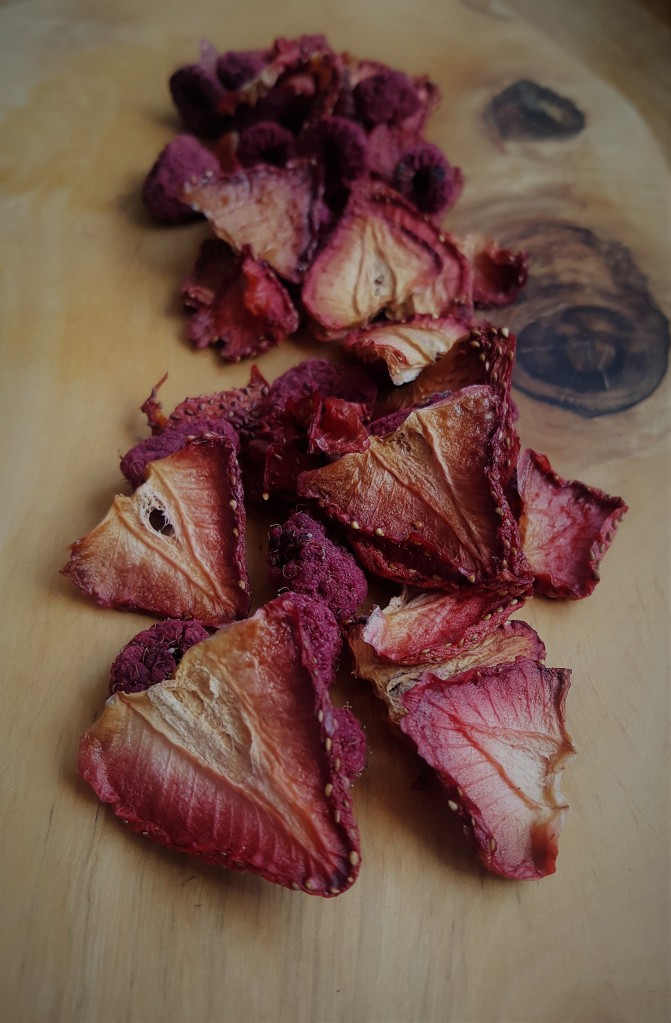 (AND A FEW RASPBERRIES THROWN IN )

Quite simply the smallest ingredient list I have even written!

There is no real need to preheat the oven but turn it onto the lowest level possible. Mine was set to 70 °C .

Wash the berries and cut the tops off. Slice them into even 3 mm thins. Place onto kitchen towel and place a piece of towel on top and gently pat them down to remove as much moisture as possible.

Place onto a tray lined with baking paper. Pop into the oven and set your timer to one hour. I liked checking them every hour just to see how they were coming along. Leave them in the oven for around 5 hours. I have read recipes that state anywhere between 3 and 5 hours but after 3 hours they were no where near ready in my oven.

Allow to cool and place them in an air tight container. They will keep for up to 3 weeks.