So it has been a looong while since I have really posted anything or looked after my blog. In truth, I just do not have the time and energy to sit down at the end of the day and write weekly posts. I am a full time single mummy, with a more than full time job and a crazy dog and gorgeous baby boy to feed, walk, play with and clean up after on my own.  I have spent a whole lot of time in the kitchen, but it is usually just the fun daily battle of feeding my son. I wish I was baking and cooking new things, but there just isn’t enough time in the week to allow for anything other than baby food and grabbing myself a quick bite. I sadly, despite the amount of time spent doing this, I am no expert on the art of feeding a baby/toddler. I am currently baffled by Alexander’s love of different foods and how quickly it changes. He also likes to use the palm of his hand to shove as much food in as he can and then give his mother a heart attack by choking every time. And he usen’t to do this. Every day brings new feeding fails but also a good few laughs. This month Alexander decided he doesn’t like lumps. Any lumpy food gets rejected from his mouth and thrown at the dog. The dog is quite happy with this arrangement in truth.

Just over nine months ago, my husband, on our 6 month wedding anniversary and when our son had just turned 12 weeks old, broke my heart by uttering the words ‘I dont love you’ and he was leaving me. For the second time in two years, I was shattered and lost and so hurt and angry I cannot describe it. Yet again, I had to become even stronger (which seemed truly unfair) and learn to deal with the events life throws at me. For me, my priority remained my son, and now months later, I am regaining some strength and my own life in order to give Alexander a strong role model who in years, he can truly admire and respect. I have become a dab hand at all things electrical in the home, I have learnt to use gadgets that I never had to before and know who to call when the heating breaks and can fix the fuses by myself too (claps myself on the back). I even learnt how to use the microwave properly. Ahhh the microwave. It has become my best friend of late, heating my not so yummy shop bought dinners for me and giving me a reminder beep when dinner is ready as I’m usually too exhausted to remember to eat. But that will all change. I have a new game plan. Watch this space!

So new goal: to carve out time for me and to do things I love and be happier than before and be with people who value me, respect me and most of love and adore me. I want to get back into doing things outside of just being a great mum, including cooking and art and lots of wonderful things. I highly doubt I’ll get to do them as frequently and on schedule as planned but then as a single mother, you get used to that.

Alexander turned ONE  two weeks ago and it is simply amazing. I never thought I would be here talking about having had the joy of throwing him a birthday day without all the sadness that surrounds his sister Elena’s birthdays (she is two by the way, or I should say, would be two if she were with us). Celebrating my two children’s birthdays couldn’t be more different but no less special.

Ok so it’s late at night, I have done all the cleaning and bottles and tidying of toys and unpacking of Alexander’s weekend bags and to put it simply I don’t have the energy to write a long recipe of my son’s first birthday cake. My sister informed me that I could probably get away with this so I’m going to give it a try. Alexander’s cake was special. I decided to make him a version of one that I made his sister so that she was more present in his day. For the recipe, I followed one I have posted before but substituted pink food colouring for blue food colouring. So hopefully you’ll all let me get away with just reposting the recipe? (please say yes)…

Super yummy cake, blue for our little boy and thoroughly enjoyed by all. 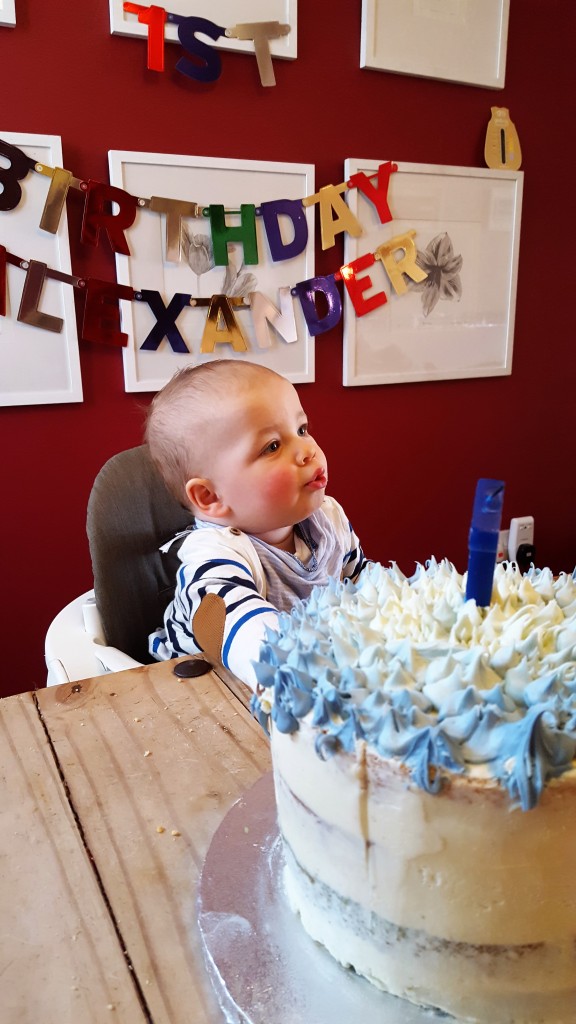