This week I literally haven’t even been thinking of human food for dinners. All I seem to have been doing is making sure the puppy and kitten have food and have been fed and walked at the right times, we however have forgotten completely about our own food. It never seems to amaze me how much dog food costs and how we seem to go through it much quicker than imaginable. Which leads to panic when we both get home and are starving and tired. I have to admit that we got a shop bought lasagne for dinner on Wednesday. Oh the shame! I really dislike buying pre-packaged food, no matter what, I usually make something even if it is as simple as pasta with onion sauce, cheap and cheerful and we never seem to tire of it. But this week, we didn’t even have the pasta or onion in the house as we were too busy to go shopping, oops!

Yesterday when I started my shift in work, one of the women I work with who looks after the cheese counter, asked me if I like fancy smelly cheese. I replied ‘Of course’ and she popped a box of Epoisses into my hands. Score! I love Epoisses and it is even better when it is free. So for at least one day this week I had something in mind for a home cooked dinner. Baked Epoisses cheese with pancetta, toasts and a red wine sauce. Oh my god was it good! 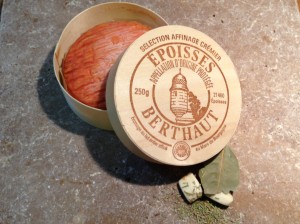 Epoisses (Epoisse de Bourgogne) is french a cows milk cheese that is washed in brine and then in brandy and has a destinctive soft red-orange rind. This cheese is so soft and runny that you can smear it on bread or crackers or like last night it can be baked in a similar manner to camembert. I remember once having this cheese with my mother on a sunny day in the garden. We were setting up the table outside, placed the cheese on the table and went in for water and bread and when we came out the cheese had run off the board and onto the table. The table is an iron table with holes all over it and the cheese had run down through the holes too. We love this cheese so much we were tempted to lick it off the ground but decided this would be a step too far so we ate what was left (on the table and the cheese board only). But it is a memory that has stuck with me and I think of every time I see Epoisses.

BAKED EPOISSES WITH PANCETTA AND A RED WINE SAUCE

This is a super simple meal. You can simplify it even more by not bothering with the sauce but it just adds an extra dimension to the dish.

Fry the pancetta until golden and place in a small serving bowl. Remove the Epoisses from its box. Staple the join on the box, place the Epoisses in a 30 cm square piece of grease proof paper and put back into its box. 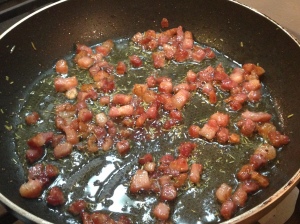 In a non-stick saucepan, caramelise the sugar over a low heat, then add the 1/2 bottle of red wine and boil for 5 minutes. Add the herbs, bay and garlic and boil for another 5 minutes until it has reduced by two thirds. Strain the sauce through a sieve into a jug and set aside.

Place the Epoisses on baking tray and cook in a pre-heated oven 8 minutes at 200ºC until the cheese is very runny.

Remove the Epoisses from the oven and place on a serving platter. Top the cheese with some of the pancetta and a spoonful of sauce.

Place the bowl of pancetta and pot of red wine sauce on the serving platter. Surround with slices of baguette and serve.